Syed Fouzul Azeem (Arshi) is the most sought after person in Okhla for publications with reporters from various outlets lining up outside his house in Noor Nagar to find out his version of the story of saving an old temple from any damage.

It was 40-year-old Azeem’s efforts to protect a temple in Noor Nagar which yielded positive result, with the High Court directing the police to ensure that a temple at Noor Nagar extension is “protected”, “maintained” and not encroached upon.

The OT was first report about this development. Read the report here: This is how Muslim youth came to help of Noor Nagar temple

Azeem is a resident of Noor Nagar and had moved the court for the protection of the temple. Also, he is president of 206 ward committee, whose members are from the area. 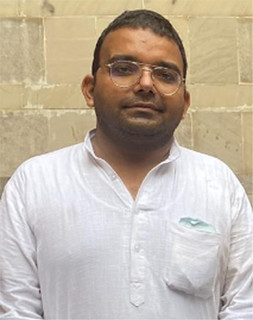 Since the order surfaced, Azeem good work of moving to the court in consultation with some other local residents to save the old temple from being damaged has been highly appreciated by all.

Since then he has grabbed headlines with national dailies giving coverage to the development.

He told the OT over phone that it was on Sunday when a reporter from the TOI approached him to know the fact about Noor Nagar temple.

“A reporter from BBC also contacted me for doing a story. It was a busy day today as many journalists, including one from India Today, turned up to interview me and the residents who stood firm to save 50-year-old temple,” said Azeem, who is an alumnus of Jamia Millia Islamia. He said his father also went to Jamia.

His grandson came from Allahabad to settle in Okhla.

There was such a rush that Azeem, a businessman, forgot to keep the count of reporters who contacted him the last two days and said he is always willing to work for the betterment of society and locality.

“I moved court to ensure that the friendly atmosphere of the area was not vitiated. Noor Nagar is a Muslim-dominated area, but there are 50-odd non-Muslim families living here too. We have always promoted communal harmony in the area,” said Azeem reported the TOI.