A post is doing the rounds in the virtual world in Okhla of a journalist in which he has criticised Jamaat-e-Islami (Hindi) for failing to add more beds in Al-Shifa hospital and spending huge amount for extension of its Ishat-e-Islam mosque building.

WE NEED YOUR SUPPORT TO SURVIVE. DONATE RS 100, 500, 1K OR MORE TO SAVE COMMUNITY JOURNALISM: JUST CLICK TO PAY

Tarique Anwar wrote this after he said a woman patient known to him was denied admission to the hospital. The OT made several calls to Awar to speak to him but he didn’t pick up the phone and even after hours is yet to return the calls.

SPONSORED: 2 Batla House–based entrepreneurs launch alkhadim app so that you can shop from comfort of your house 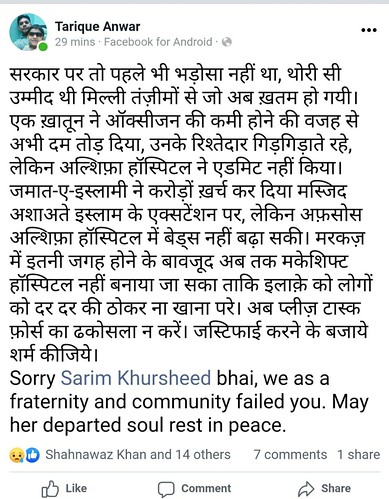 The OT contacted Dr Jawed, MS Alshifa hospital, to get his version. “I am not aware of such incident. It is pandemic time and here doctors are working 24 hours. We have taken patients more than our strength. If there is no bed how we can adjust new patients,” he said over phone.

A few days ago the OT had run a story about how Al Shifa hospital has stopped emergency service. Also, it had put notice on the door saying beds are full and no admission.

On JIH preferring mosque over hospital, Al-Shifa chairman Md Zafar told the OT over phone that this is not the case. “We appealed for funds for mosque extension and hospital as well. People gave fund for mosque that is why it was extended. The appeal for hospital is also there and when we get funds then hospital will be extended further. The JIH is doing other works also on the campus as running schools, hospital and scholarship programmes and more. When it comes to mosque the Ummah gives generous donation compared to hospital and other projects. Despite this, the hospital has done its best in serving the local residents,” he said.

A Jamaat watcher and close to the organisation said on the condition of anonymity: “I can understand the pain.  And it’s true our priority should have been the hospital instead of mosque. But it’s not entirely true that Al-Shifa has not paid attention to expansion. Construction of 2 floors completed in last one year, interior work still going on. But it’s true that they didn’t anticipate that the 2nd wave will hit this soon and will be this deadly.

“Still they are trying for permission to start 40 oxygen beds but permission is yet to come from the district administration. As soon it’s smooth they have promised to give permission for 40 make shift beds.

“We all have shortcomings. As an individual and collectively. Our mistake is that we couldn’t foresee this disaster and hence couldn’t prepare for the same. Now that we have no choice but to act fast, we are still slow in our response. But at least something is being done by some mukhlis souls.”

“At this critical time we need to forego each other’s mistakes and stand by each other unitedly with full strength and face the challenge. Allah will surely help us,” he wrote.