After Pant’s unbeaten 89 helped India conquer Fortress Gabba, Okhla resident shares a rare photo of his with the star

It was a historic day for Indian cricket team on Tuesday as India defeated Australia in the fourth and final Test in Brisbane by three wickets chasing a 328-run target, winning the four-match series 2-1.

The moment was celebrated in the virtual world with netizens sharing photos of the match hero batter Rishab Pant whose unbeaten 89 off 138 balls helped India create history, ending the home team’s 32-year-old unbeaten run at the “Fortress Gabba”.

Okhla resident Jawed Mallik, a cricket buff, shared a rare photo of his with Rishab who stayed at the crease till the last ball, hitting the winning run.

Set a 328-run target, India’s batters showed composure at the crease while batting on the 5 th day with Shubman Gill contributing 91 and Cheteshwar Pujara 56, laying a solid foundation for other players to follow. 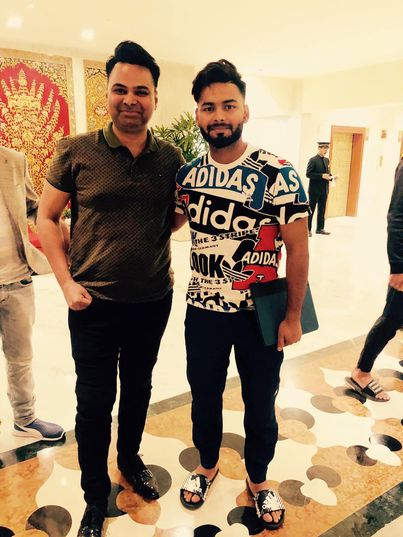 The series will be remembered as India registered a convincing win in the absence of Virat Kohli, Mohammed Shami, Ravindra Jadeja, Ravichandran Ashwin and Jasprit Bumrah.

India pacers Mohammed Siraj, Shardul Thakur and Washington Sundar also won accolades for their stellar performance in the match. If Siraj’s maiden five-wicket haul on Monday and Shardul’s 4 scalps contributed in dismissing Australia for 294, leaving India a target of 328 to win.

Besides bowling skills Shardul and Washington were praised for their batting skills on the crease, denying Australia the chance in the first inning to take huge lead.