A (PhD aspirant) was happy that his name has come in the PhD list announced by a department of Jamia Millia Islamia. But his happiness was short lived as when he reached the department a few days ago for fulfilling admission process, he was told that he has not been selected.

Left worried, he approached the OT. He said as he and other aspirants fear for action by the administration and might never be given an opportunity to do PhD from Jamia in near future so they were unwilling to share their names in the media. 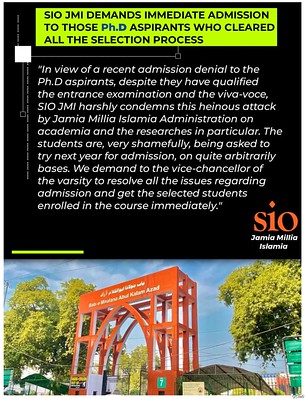 He said students’ efforts to reach the high authority even failed and many among them gave up in the hope that they might get a chance next year.

The dilemma which most of the PhD aspirants faced is whether to go to the media and tell the whole story of injustice of denial of admission despite clearing the entrance exam and the interview or just wait for another year.

Though many aspirants stayed quiet, words started spreading in the virtual world about the discrepancies in the PhD list announced by the university this year.

As words spread a students’ body in Jamia issued a statement over the issue.

In a poster doing the rounds on the social media, SIO Jamia Millia Islamia wrote: “In view of a recent admission denial to the PhD aspirants, despite …qualifying the entrance examination and the viva-voice, SIO JMI condemns… The students are being asked to try next year for admission… We demand the vice chancellor of the varsity to resolve all the issues regarding admission and get the selected students enrolled in the course immediately.”

At the AJ Kidwai Mass Communication Research Centre, the prospective candidates claimed they were selected for PhD positions, but then denied admission, reported newslaundary.com.

“After passing the entrance exam, I was called for the interview and presentation on the basis of my synopsis and research proposal, and named in the final list. I reported with all the requested documents, only to be denied admission,” said one aspirant as reported by newslaundary.com.

Jamia registrar professor Nazim Hussain Jafri told the OT over phone that there is no issue regarding admission.

Jamia’s public relations officer Ahmad Azeem told newslaundary.com: “Authorities are looking into complaints that have been received. This is not some scam as they are saying. This problem has happened because of some technical issues.”

When contacted, coordinator of PhD admission Hussain Akhtar declined to comment on the issue.

“On August 11 this year, Jamia Millia Islamia released a list candidates selected for PhD programmes from various departments. After the date for admissions was postponed three times, these selected students were finally called to campus on September 12. However, around 80 of these ‘provisionally accepted students’ then found their names absent from the final list of selected PhD candidates,” reported the portal.