Proud moment for Okhla!!! Hamza’s story will warm your heart

Proud moment for Okhla!!! Hamza story will warm your heart

Okhla resident Hamza Abdullah, an architect working with Ministry of Housing and Urban Affairs and a Jamia Millia Islamia alumnus, has added another feather to his cap. 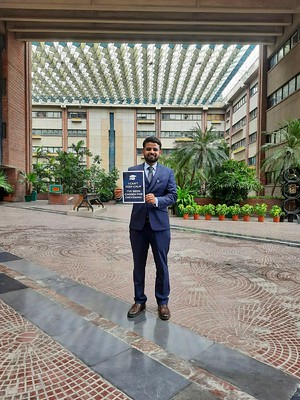 Hamza has been awarded the prestigious Chevening Scholarship to study at the London School of Economics in London. Chevening scholarship is highly competitive and is awarded by the government of UK.

“Besides Chevening, I also got the fully funded British Commonwealth scholarship (also a UK government scholarship) and LSE scholarship to pursue my Master’s. I chose Chevening scholarship. I am a regular reader of OT and if local students want my assistance in accessing such opportunities, I will be happy to work with them and guide them. I am open to mentoring young students if they want to discuss how to access these scholarships. My email id is: hamza.chevening2022@gmail.com,” he said.

Born in 1994 in Abul Fazal Enclave to Syed Tahseen Amed and Azra Yasmeen, Hamza studied at Jamia School. Later he did engineering in Architecture (2013-18) from Jamia. After which he joined Ministry of Housing and Urban Affairs and worked as India’s Smart cities fellow.

Hamza’s father Amed, a social activist, told the OT that it is a proud moment for the family members. “Hamza is very good at studies. The family is very happy that Hamza is going to the UK for higher studies. Since his school days we had strong feeling that he will do well in his life,” he said.

“The credit for Hamza’s success actually goes to my wife, Azra Yasmeen, who is a teacher. As a mother, she always guided Hamza and other children in the right direction. She is proud of her highly-talented and well disciplined son Hamza. The good thing is that like Hamza, my wife is also a Jamia alumnus. She did her MA in Islamic Studies from Jamia and was a Gold Medalist,” said Ahmed.