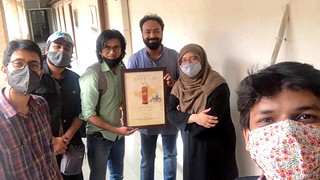 “Mubark to all our team members for making this dream a reality. I would especially like to thank our teachers and staff at AJK MCRC who supported us day and night for this production to become a reality.

He told the OT over phone that documentary film is about an Indian who stayed in India after partition though all members of his family travelled to Pakistan. Over years he lost his contacts with relatives and now he and his children are asked to prove their patriotism from time to time,” he said.