The Mehfil-e- Chaizade is a unique in-house festival of Aseem Asha Foundation which is usually celebrated on the occasion of Christmas. It was conceptualised to enjoy the ecstasy of literature and legacy of noted poets & writers with a cup of tea so that the message is conveyed to the young generation as well.

In the initial phase of the Mehfil people such as poets Musavvir Rahman, Bushra Alvi Razzack and Yaseen Anwar, Urdu Storyteller, Fouzia Dastango, participated in the celebration and brighten every soul with melody of work by legendry literary personalities.

This year Aseem Asha Foundation celebrated Ghalib on Christmas. However, his birthday falls on 27th December, for this it invited Swami Oma, The AKK , poet, spiritual guru & art lover from Banaras. 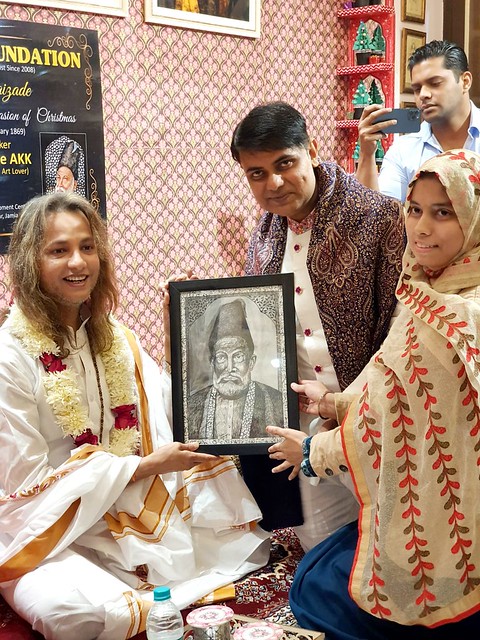 In spite of being claustrophobic he passed by the crowded roads to the dingy lanes and finally got a sigh of relief once he reached at Aseem Asha’s Okhla Community Development Center.

He was amused by the ambience of center and the juxtaposition of the cultural symbols in each and every fragments of the room. In appreciation of the event he wrote, 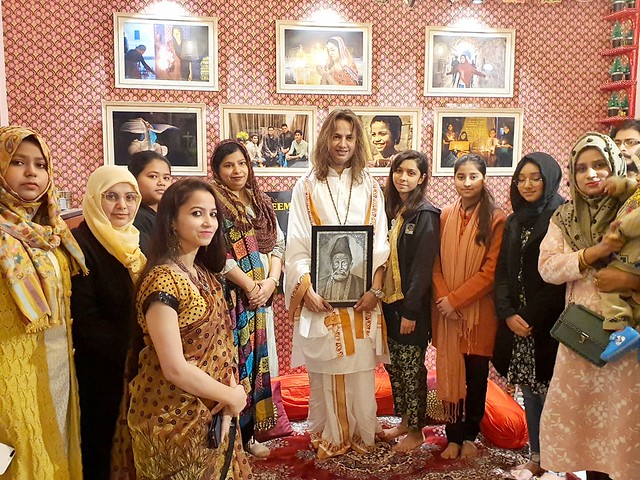 Aseem Asha Usman, Founder and Managing Director of Aseem Asha Foundation greeted the Swami Oma with floral garlands and presented him a handmade portrait of Ghalib by community budding artist Adeeba as a souvenir that he liked very much and also expressed his gratitude.

Shafia Khan, a community girl anchored the programme and volunteers of the foundation such as Tarun, Mushtaq, Shakir, Sumaira, Saqib and others helped a lot for making this event a success.

Aseem Asha talked about the brief history and works of the organization related to arts, literature, relief, short films and also unveiled the plan to open a new Media Resource & Training Center (MRTC) so that the talent of community could be nurtured.

Swami Oma beautifully described the life and works of Ghalib in humorous and lucid manner for the audience and also highlighted the character of Jesus Christ in Ghalib’s Poetry and viz a viz.

He added: “In a conclusive manner Urdu poetry revolves around three major poets i.e., Mirza Ghalib, Mir Taqi Mir & Allama Iqbal hence, it forms a triangular relationship among them. Mir symbolizes the sophistication or graciousness while Iqbal symbolizes arrogance or courage and Ghalib is a continuum of both as Ghalib is the beginning for Iqbal and an end for the Mir.”

He also compared the style of poetry between Ghalib and Mir by reciting a couplet of Mir “be-ḳhudī lega.īkahāñhamko,der seintizārhaiapnā” which signifies the helplessness and in the same way presented a couplet by Ghalib “ham vahāñhaiñjahāñsehamkobhī kuchh hamārīḳhabarnahīñaatī” that shows rational logic and valor.

Talking about the relevance of Art and Artist in the society Swami emphasized: “Artists can never be a poor, if in any society, the artist is poor it means the society is unfortunate as it is not able to value and protect the arts that exists in it.”

At last, he endorsed the personality of Jesus as a loving being for all as he can love each and every one unconditionally, he narrated: “Once a deranged dog bit Jesus brutally, it had taken out the flash of his feet and on seeing this, the passerby hurried to kill it but Jesus promptly hugged the dog and removed the hair stuck in his mouth very gently so that it can eat comfortably. This warm gesture made the insane dog calm.”

Many people from various parts of Delhi NCR having professions like doctor, professor, poet, engineer, students and young generation took part in the celebration and were inspired by Swami’s enlightening discussion.

At the end young poet, Asif Afsar, recited some of his urdu couplets that were liked by everyone. Christmas plum cake with snacks were served to one and all to conclude the event.

Later, Swami Oma sat with some special audience in which Aseem Asha took his informal interview about his struggle of life. He shared some of the interesting anecdotes of his life that were very enriching. On 27th December, students of Aseem Asha Foundation will visit the shrine of Ghalib in Hazrat Nizamuddin premises for Ziaarat and will pay a tribute by offering roses on his grave.