A film based on the life and works of veteran artist late Mohammad Yasin was screened in the international webinar at East West Centre, Hawaii titled “Spotlight on South Asian Artists: India & Pakistan” on July 26, according to experts in Okhla. 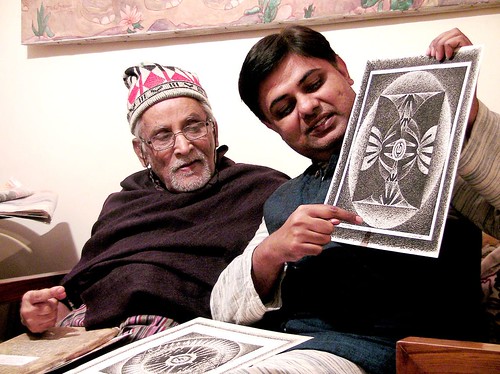 The Spotlight featured South Asian artists namely Asma Mahmud Hashmi, Sadaf Naeem, and the late Mohammad Yasin, who all lived and studied in Hawaii as art students. Asma and Sadaf had shared how their experiences in Hawaii had shaped their work.

The East–West Centre (EWC), or the Centre for Cultural and Technical Interchange Between East and West, is an education and research organisation established by the US Congress in 1960 to strengthen relations and understanding among the peoples and nations of Asia, the Pacific, and the United States, they said.

It is headquartered in Honolulu, Hawaii. The event also premiered a musical performance by Brooklyn-based violinists Trina Basu and Arun Ramamurthy of Brooklyn Raga Massive, specially composed as a tribute to Mohammad Yasin. The musical composition was inspired by the paintings of Mohammad Yasin based on the theme of Adam and Eve, Om and Allah, Immortal Relationships, Happiness etc. It is a matter of great pride that his works inspired the artists of different genre i.e., music beyond the peripheries, it’s the corroboration of his versatility that is inspiring the world.

In order to highlight the experiences, works and life of Mohammad Yasin an excerpt of documentary film “Roadmap of Yasin as a Painter” was screened which was produced by Aseem Asha Foundation in collaboration with Qalamkaari Creative Calligraphy Trust and directed by Aseem Asha Usman, Mushtaq Ali, Md Shakir & Tarun Yadav assisted in camera and film editing.

Mohammad Yasin at the age of 92, passed away on August 19, 2020 at his residence in Shaheen Bagh.

He was born on January 4, 1928 at Mugalgidda village, Hyderabad (Andhra Pradesh). Under the aegis of Aseem Asha Foundation and Qalamkaari Creative Calligraphy Trust an hour-long documentary film was produced on his life and work, said Aseem.

The remarkable work of Yasin inspired many students of Aseem Asha Foundation to take apprenticeship in arts and now they are doing extraordinary work in this field, he said.

Aseem Asha Foundation in collaboration with Qalamkaari Creative Calligraphy Trust is planning to organise a national webinar on the first death anniversary of Mohammad Yasin on August 19 in which his acquaintances, well-wishers, colleagues, art lovers, art critics and relatives will be invited to share reminiscences of him.

Click on this link fb.watch/6ZThGkA_RL/ to watch the full webinar of today’s screening.

About AAF
Aseem Asha Foundation is a non-governmental, not-for-profit, and enrolled altruistic trust which is broadly working in the field of education, art, media, women empowerment, and environment, empowering networks in ICT devices and numerous different classifications since 2008.

Words and photo by AAF