The Covid-19 pandemic period has compelled many people to ask for help in their difficult days. And fortunately there is no scarcity of those people also, who want to help.

This situation urged a platform on which both group of people can meet each other. Such platform is known as crowdfunding. 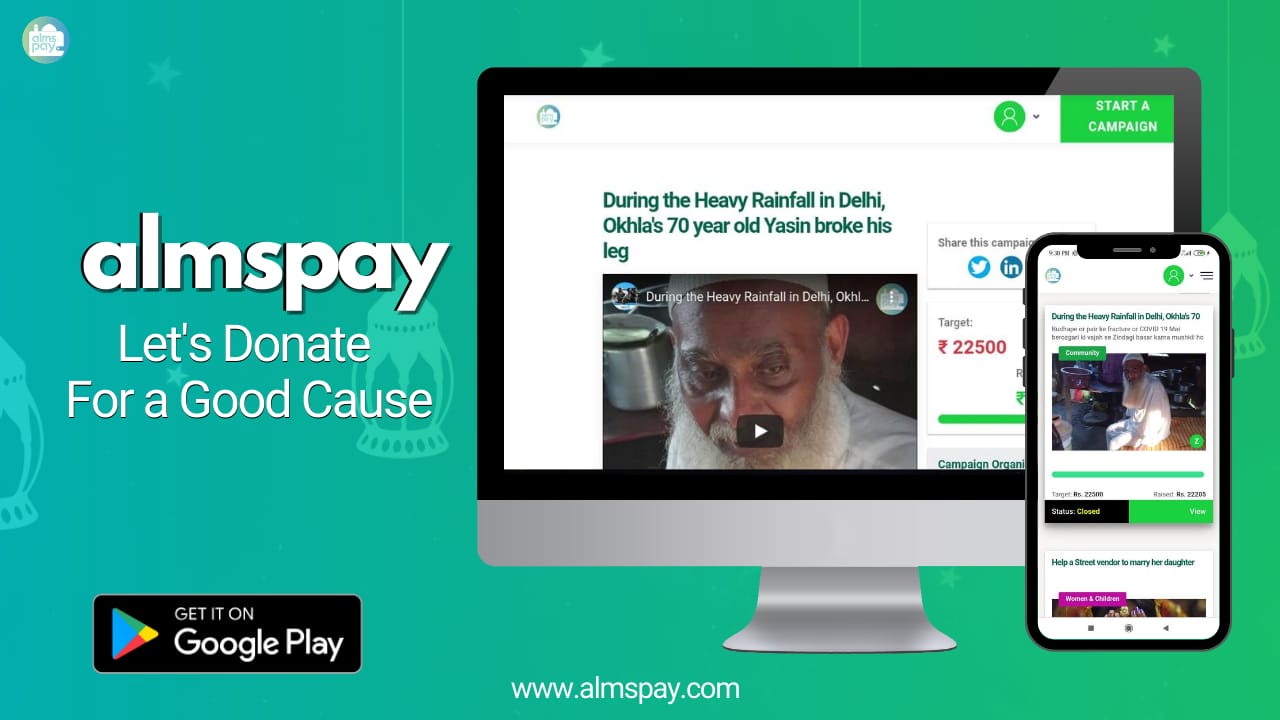 In Okhla recently, flood has damaged many jhuggis of poor. One among them, an old person Yaseen who had broken his leg and lost his daily wage got repaired his jhuggi and also got ration and medicine by the help of donors through Almspay campaign.

Almspay is an emerging and rapid evolving authentic microdonation platform, aimed for crowdfunding for various noble causes to help those who can’t help themselves.

Since its emergence in Jan 2020 with the head office in Okhla, Almspay has become a way for people, businesses and charities to raise money. Almspay is a registered company having its own website and App.

Donors at the community level can now easily contribute to NGOs Masjid & Makhtabs with whom they closely associate and trust using the Almspay app. Almspay makes donating Zakat easy and convenient for donors. To hold the trust of muslim donors Almspay through its app wishes to eliminate middlemen who are appointed by institutions to make the collection and get a commission in return.

On Almspay donors can directly donate Zakat & micro community donations and get receipts on email for Zakat.

Almspay app also allows donors to track their monthly/ annually contributions on the app and keeps an eye on their monthly or yearly donation goals. Almspay is focused on zakat & micro-community donations. Furthermore, Almspay has collected an enormous amount of donations for various masjids, maktabs and madarsa in New Delhi.

It has raised sufficient money to make various campaigns successful which helped many needy and poor to get food, medicines and shelters.

More than 50 campaigns have been listed with Almspay in less than 5 months and also emerged as successful. People in urgent need have spread their stories through these campaigns and got help on time.

The fundamental of crowdfunding is the weight of helping someone is distributed among many rather than pressurizing just one or few individuals in society. This reduces the burden of helping several people at same time.

These small donations by individuals collectively become the reason of happiness for many poor families. In the last few months, founder Asif Iqbal says: “Almspay has received over 300 applications from Masjids, NGOs and Makhtabs to list on their platform. They do complete verification before listing and till now 50+ institutions are listed after verifications. Considering that they allow micro-donations between Rs 10 to Rs 5000, Almspay has raised an amount of Rs two lakh for these institutions.

“Most of these institutions have raised donations to feed hungry and to sustain in this tough period of pandemic. Apart from the micro donations 500+ donors used Almspay to pay zakat during the holy month of Ramzaan. Zakat of around 5 Lakhs was collected in 30 days from the said group of donors.”

Almspay is actively working in Okhla and continuously extending its reach to help poor and helpless people by picking several issues of Okhla and running successful campaigns. By creating a crowdfunding campaign with Almspay, you go through the invaluable process of looking at your campaign from the top level, campaign manager Kashish Azeem said.

People can easily and smoothly fund their campaigns on Almspay platform for social-economic issues. In crowdfunding with Almspay, you are able to centralize and streamline your fundraising efforts. So instead of duplicating efforts by printing documents, compiling binders, and manually updating each one when there’s an update, you can present everything online in a much more accessible format, leaving you with more time to focus on your case instead of fundraising.

Almspay reduces the risk of investing to zero percent as it strictly avoids funding quackery, especially costly and fraudulent cancer treatments. It has been used to fund a wide range of for-profit, entrepreneurial ventures such as medical expenses, travel, and community-oriented social entrepreneurship projects. Almspay continues to evolve with its extending reach and exposure with noble purpose. It’s becoming one of the best crowdfunding platforms.